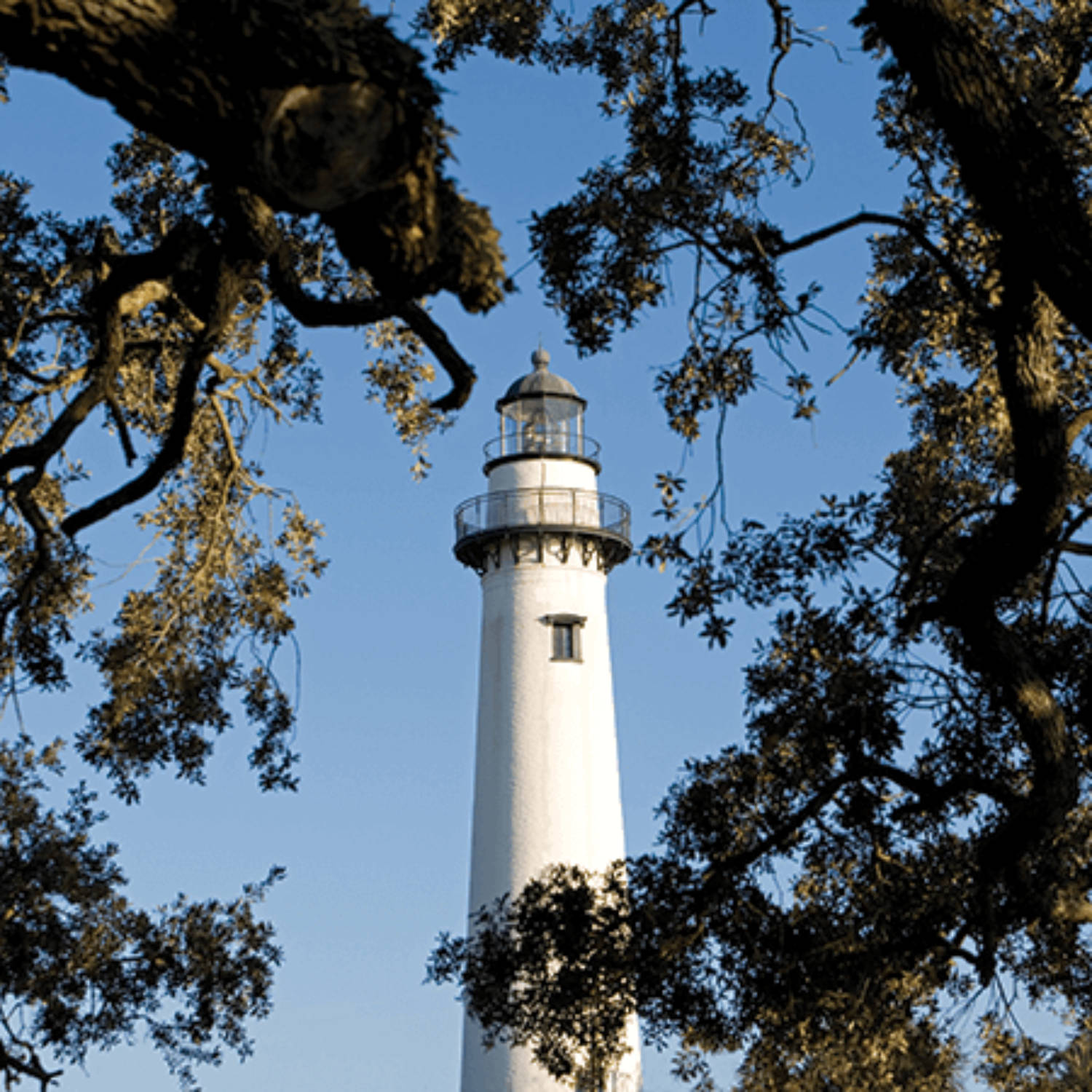 Perhaps the most beautiful and recognizable landmark on the Georgia coast is the St. Simons Lighthouse, a much-visited, photographed, and beloved monument to the island’s nautical history. On a clear day, the climb of 129 steps to the top of the 104-foot gleaming white tower allows perhaps the most glorious view to be experienced on the Georgia coast. The keeper’s cottage, where the museum is located, is believed to be the oldest brick structure in Glynn County. It was built of Savannah grey brick with Georgia heart pine floors in 1872, and is on the National Register of Historic Places. The museum is furnished with antiques that belonged to the old families of St. Simons, including one early nineteenth century secretary from Retreat Plantation.

The first structure built in the area of the lighthouse was Delegal’s Fort, built in spring of 1936 by troops from South Carolina. It was replaced in 1738 by Fort St. Simons, which was destroyed by retreating Spanish troops after their defeat in the Battle of Bloody Marsh in 1742. The area became a plantation owned by John Couper, who sold 4 acres for $1 to the Federal government for the construction of a lighthouse. In 1807, James Gould of Massachusetts was hired to build the first lighthouse. Although the original specifications called for brick, Gould used tabby, a cheap, durable “coastal concrete” made of equal parts oyster shells, lime, sand, and water. He built a 75-foot octagonal tower, 25 feet in diameter at the base tapering to 10 feet at the top. The top 12.5 feet were constructed of brick, and supported a 10-foot-high, 8-foot-diameter iron lantern equipped with oil lamps suspended by chains. An 8-foot-thick base supported the weight of the structure. In 1810, Gould was appointed first keeper by President James Madison, and was paid $400 a year until his retirement in 1837. The lantern was originally powered by whale oil, but when the majestic animals were hunted to near extinction, lighthouses switched to kerosene. St. Simons Island author Eugenia Price wrote a historical novel about Gould’s efforts, titled simply The Lighthouse, which was the second installment in her trilogy about St. Simons Island.

In 1857, the lights of the lighthouse were greatly improved when it was fitted with a third-order, double-convex lens, which can cast a beam 18 miles. This improvement was to be short-lived, however, because of the arrival of the Civil War in 1860. Stationed at Fort Brown, a wooden bastion near the lighthouse to protect St. Simons Sound, were the Macon artillery troops and six field guns. In 1862, when Union warships blockaded the Georgia coast, the Confederates decided to abandon St. Simons, and before leaving, they dynamited the lighthouse and burned Fort Brown so they would not aid their enemy. The ruins of this first lighthouse are found on the complex grounds east of the tower.

After the Civil War, the Federal government decided a new lighthouse was needed on St. Simons Island. Hired to design and build the lighthouse and keeper’s house was noted Irish-born architect Charles Cluskey. He designed a graceful, 104-foot, round tower and a nine-room, two-story Victorian house for the keeper. The architectural details not only enhance the beauty of the house but also draw the eye upward to the lighthouse. Cluskey died of malaria a year before he was able to see his work finished in 1872. In 1876, the keeper’s house was upgraded and a speaker’s tube linking the house with the top of the tower was added. A fire-proof brick oil house measuring 9 feet by 11 feet that could hold 450, 5-gallon oil cans was constructed next to the lighthouse in 1890. This building’s purpose became obsolete when the kerosene lamp was replaced by an electrical one in 1934. When the last lighthouse keeper retired in the 1950s, the U.S. Coast Guard fully automated the lighthouse. Today, the Fresnel lens is illuminated by a 1,000-watt mogul lamp, which rotates once a minute.

In 1972, the Coastal Georgia Historical Society took over the unused keeper’s house, restored it to its original design, and opened it to the public. A series of renovation and restoration activities continued on the tower and complex until 1984, when visitors were allowed to climb to the top of the lighthouse.

Today, the romantic lure of the lighthouse is irresistible on a foggy night, as the light sweeps slowly out into the night, comforting sailors in the sound and reassuring residents in the community that part of their heritage remains intact for future generations to appreciate.